According to Wallace Boyer in Chuck Palahniuk’s “Rant”: “… every person is obsessed with himself. You are your own favorite hobby. You’re an expert on you”. With that in mind, I spent some time exploring my YouTube viewing / subscribing habits over the last few years!

Yes, this post is going to be of limited interest to anyone besides myself / any stalkers I happen to have. However, detailing the simple steps I took may help you to do the same!

You can also just view my final spreadsheet.

For a few years, Google have had an excellent Takeout service available, where you can export data on demand.

After requesting the takeout, you should receive an email in 5-10 minutes with a link to download your export: 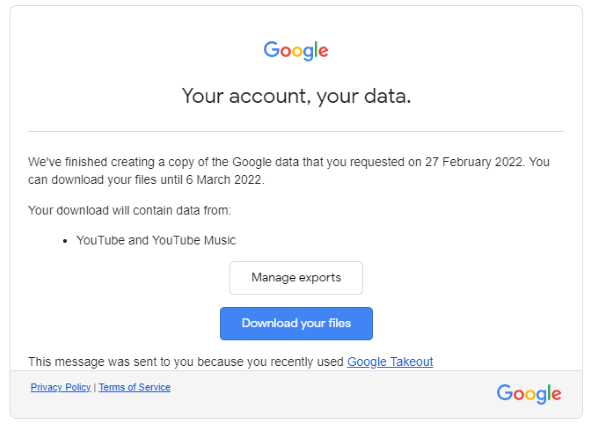 Inside your takeout zip file, you’ll find /history/watch-history.html, a list of every video you’ve watched! As a heavy YouTube user this only showed the last 4 years, but it may show much further back for you.

If you open up Google Sheets, you can import your subscriptions to start analysing the data via File -> Import: 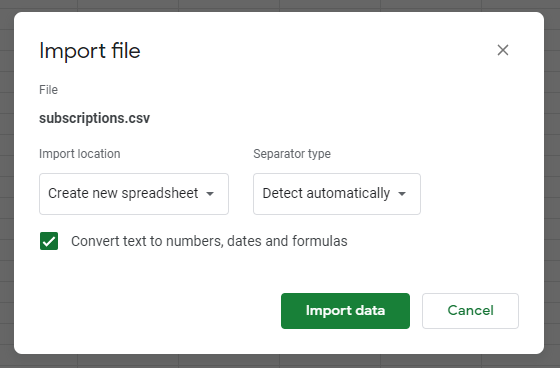 Now we have a basic spreadsheet, I wanted to know how many times I’d watched a video from each YouTuber. This could have been done programmatically, but doing it manually was quick enough.

There are 2 ways to get this count, both easy but repetitive:

There’s nothing clever or complicated involved, just repeating a 2-3 second action a couple of hundred times!

I next decided I wanted to know what genres I watched, and how popular the channels were. For subscriber count, I just opened each URL and wrote down the subscriber count. After doing it a few times, it’ll become very quick & automatic!

For genre I decided to use my own categories, as YouTube’s are quite broad (e.g. “Gaming”). I defined these in a new sheet “Genres”, and added data validation to the whole “Genre” column in my main sheet (right click -> more actions -> data validation): 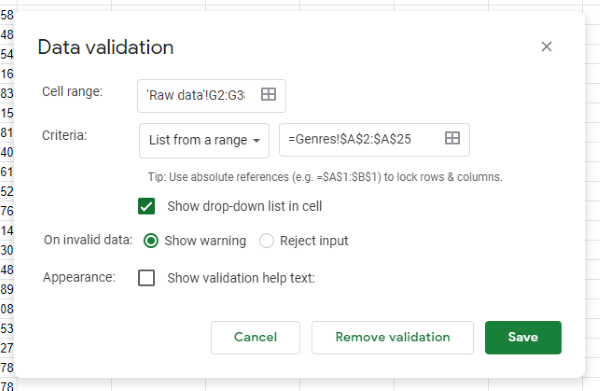 Finally, I wanted some sort of measurement of the “nicheness” of a channel. For example, which relatively unknown channels have I watched many videos from, and vice versa. To approximate these, I just used videos watched / channel's subscribers, then x100 to make the numbers easier to work with:

I then used LARGE for the first time, which gets the Xth biggest number in a range, to find my highest and lowest fan factors. The formula for the highest fan factor was =LARGE('Raw data'!G$2:G$398, 1).

The spreadsheet itself is here, if you’d like to see the formulas etc.

I was actually pretty surprised by the final results of this! My top channels over the past 4 years:

Turns out, if you combine Hat Films & Hat Gaming, they’re my most watched creators (excluding clip channels)! It’s a bit of a surprise, since I don’t feel like they put out TONS of videos. However, consistent high quality (and a rewatchable back catalog) apparently pays off. Excluding the spin-off / reupload channels, Angory Tom is the lowest subscribed (i.e. most underrated) creator in the top 15.

I often put on YouTube reuploads of old Twitch streams when I can’t sleep, so I thought channels like Jerma Stream Archive would be high. However, since the streams are 4-5hr long, there’d only be 2 views even if I watched all night! Contrastingly Jake and Amir have hundreds of 2-5 minute videos, so hundreds of views can be amassed in just a couple of hours total.

It’s not very surprising that most of my top YouTubers are gaming based, since I often have gaming videos in the background whilst working, like TV. I’m surprised 3kliksphilip is there, since he has his views split between 3 channels, and uploads less frequently than other YouTubers. The high view count despite this probably reflects the consistently high quality and attention to detail in his videos.

Unsurprisingly, when grouped by genre gaming videos make up the vast majority of my viewing:

My interests in space, cars, and car games have really ramped up in the last 2-3 years, so I expect the top 2-3 genres reflect 2018-19 more than 2020-2022. It’s also amazing that I’m subscribed to 25 Jerma channels, when there are only 2 official ones! The community has a lot of fan-made content.

That single “Other” channel is LOCAL58TV which… really doesn’t fit in any category.

I was hoping my “fan factor” calculation (my views / channel subs) would highlight some great small creators that I really enjoy. Unfortunately, it highlighted… tiny channels that have made 1-2 spin-off videos (e.g. a Jerma985 compilation), some personal friends and not much else. A future improvement would be perhaps filtering out channels with < 5 videos and < 1000 subs.

The low “fan factor” is unsurprisingly channels that I don’t actually watch videos from. In this case it’s a large YouTuber, 3 musicians, and a great channel that has stopped uploading:

So, what did I learn? Well, I learned that I like YouTubers with consistently high quality gaming videos, which I probably already knew! I also found that I’ve watched at least 1 video from all of my subscriptions in the last 4 years, even those that haven’t uploaded in 5-6 years. Some of them could probably be removed though, if I’ve only watched a single video!

Was it worth the time taken? I learnt a few things about Google Sheets, and it was an interesting diversion, so yes. Just.